There is a school of thought that ‘The Old Chapel’ was once fairly central, or at least very near, to the Mediaeval Village of Ullenhall. Aerial photographs seem to back this theory, noting changes in soil colours where roads and buildings once stood. The site of the Chapel situated on the hill was of common practice, as it was clearly visible for miles around; a sort of beacon. Today it stands alone with its old cottages for company. (Bushell, Ancient Ullenhall 1989).

Although there was probably a building on this site pre-Christian times, of the original building, only the Chancel is left. In 1875 the Newton family of Barrells built the new church of St Mary’s on a site nearer to the village. The nave of the ‘Old Chapel’ was considered to be in a dangerous condition and it was thought necessary to take it down. The chancel was repaired so that it could serve as a mortuary chapel. The cost of this work was £388 12s 2d. To raise this amount the Vicar and Churchwardens appealed to “the liberality of their fellow-parishioners, to those connected with the parish by ties of birth and property, to those who have worshipped in the Old Church, to those who cherish the memory of the dead resting within and around it, and to those who would wish to preserve the examples of medieval art, with the monuments illustrating the history of the Throckmorton, Knight, and other families which it contains”. Money was also raised through the sale of at least 40 copies of a drawing of the ’Old Church’ made by photolithography. 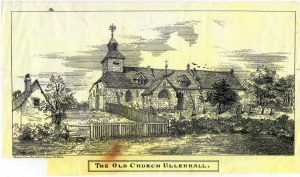 When the Nave was taken down, an ancient doorway carved in the early English style was found on the wall showing that an earlier and more beautiful church once stood in the same spot. From the character of the mouldings and carvings discovered, it is probable that the earlier Church was built very early in the 12th or 13th century. It was found, beneath many coats of whitewash on the walls, that there were three layers of coloured decorations, the oldest was of decorative design, while the second and third depicted passages of Scripture all in pre-Reformation style which were taken from an older bible than the Authorised Version of 1611. (Bushell, Ancient Ullenhall 1989).

In 1962 some restoration work was carried out with the aid of a donation from the Tarleton family, eight generations of which are buried in the graveyard.

By the end of the 20th century it was apparent that more work was needed. This became the ’Millennium Project’. Money was raised in various ways including through the sale of prints of a painting of the Old Chapel and of the Church. A grant from English Heritage was also received. Finally in 2003 work was able to begin. The roof of the Chapel was re-tiled, the windows taken out and cleaned, the monuments cleaned and the bell was re-hung. This is a great improvement, especially the latter, as during our Millennium Service attended by over 80 people on Saturday 1st January 2000, when church bells had been ringing across the country at noon a golf ball had to be thrown up at the Chapel bell to get it to ring.