Dedicated to St. Mary, stands on a considerable elevation, and may be seen for miles on the east and south. In the year 1256, Taurinus, prior of Wootton, granted the tithes of corn here to William de Romesty for eighteen marks. The Church Goods found here were, temp. Edward VI, 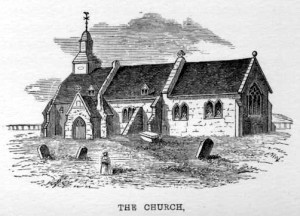 The building, which Dugdale calls “a fair Chapel,” consists of a nave, chancel, south porch, and a timber-framed belfry, containing two bells, with a turret or cupola over, resting on the roof of the nave. The nave and chancel are lighted by lancet and ogee windows, and have a ridged roof of equal height. The eastern window is a pointed arch of three lights. The gables of the nave and porch are each surmounted with a cross. The interior presents no very interesting features, the roofs of both nave and chancel having been covered with a coved ceiling in 1755, and the chapel seated with high pews, those in the chancel being nearly five feet in height. These with the unsightly gallery, and the two dormer windows in the roof of the nave, completely spoil the appearance of what might be made a very neat place of worship. The chancel is separated from the nave by a pointed arch, the half pillars, or piers, of which have been cut from the wall. A small portion of the rood screen remains. There is a piscina and locker in the south wall of the chancel, and the east and two side windows are filled with coloured quarries, the gift of Robert Knight, esq. Over the east window are the arms of Knight, painted on a shield. The communion rails are modern, bearing date 1820, the old ones, in the style found in many churches in the neighbourhood, being used as a balustrade to the stairs of the gallery at the west end. The porch arch is blocked up, and the porch serves for a small vestry or robing room. The font is an octogan in shape, and plain. In the chancel is a large mural monument to the Throckmortons, owners of the manor after the time of Edward VI, and another to the earl of Catherlough. A small tablet, south of the east window, records the births and deaths of various members of this family, whose remains were removed from the mausoleum in Barrells Park, on the 30th of October, 1830, and deposited in a vault here. In 1875, the belfry and nave were razed, and the chancel left as a mortuary chapel, a larger church nearer to the village having been built by the Newton family, “In Memoriam”.