ULLENHALL – PROPOSED VILLAGE CLUB – On Friday last a public meeting was held in the village schoolroom to consider an object the advancement of which should have the sympathy and help of all interested in the welfare of Ullenhall, i.e., the formation of a village club. Mr. Jones, of Brook House, presided, and about 50 local folk were present. Divergent views were expressed, some maintaining that nothing short of a hut would suffice, while others felt that the adaptation of the existing house known as the Coffee House or the Rest House would meet the case. It was said that, the landlord, Mr. J. Allcott, would let it for the purpose proposed. Previously the school has been the only place wherein entertainments could be held, and it is felt that something better is needed. Those who press for the building of a hut argue that if the Coffee House is rented there will be no room for dances. They also maintain that to run a club at the Coffee House will entail heavy expenditure, and the village will still be without a place to call its own. Those taking the opposite view rule out a hall because of its cost. Dancing can still be carried on in the school. Although the matter was virtually settled at Friday’s meeting, these two views are still under discussion. It was decided to approach Mr. Allcott, who, it was intimated, was willing to let the house at a weekly rent of 17s 6d, the tenants to pay rates. It was suggested that part of the house, which is a large one, could be let to a caretaker. A committee of 14 were elected and met on Monday, when Mr. Jones was again in the chair. It was decided to make a start shortly, and to hold a concert in the Coffee House to give the club a send-off. The Coffee House – a big, modern building of handsome appearance – is at the bottom of the village street. The two rooms which it is proposed to use for the club are large, well lit, and should serve the purpose well. They are not large enough, however, to accommodate a big party. (Stratford-on-Avon Herald 11th Nov 1927). 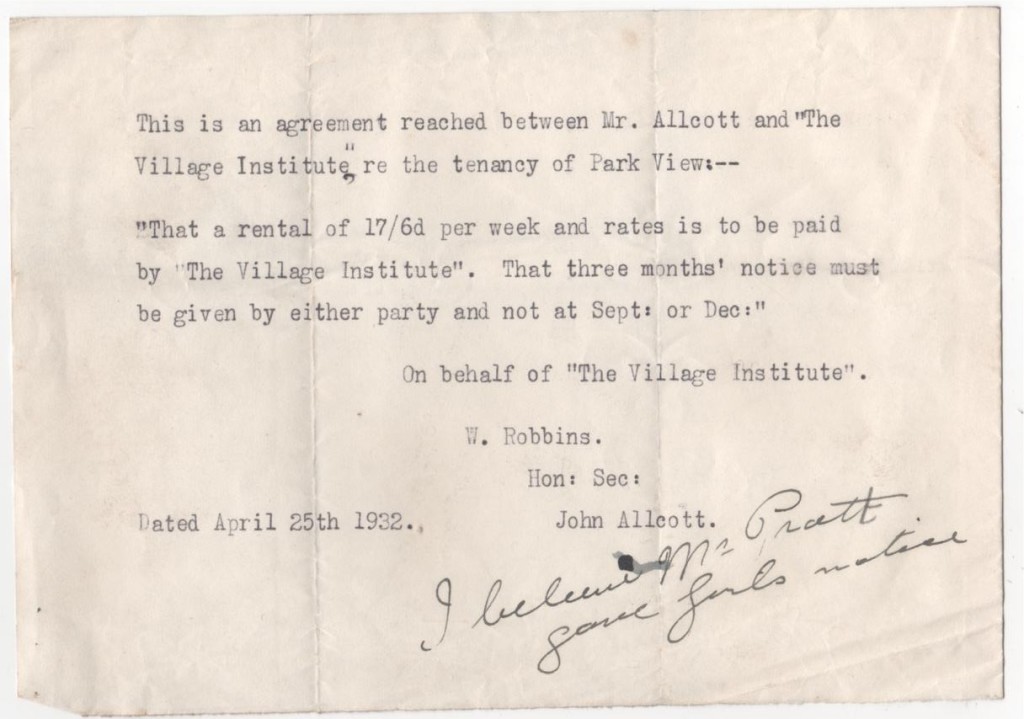 Ullenhall Village Institute was opened on Saturday November 26th 1927 by Major Bradbury for the benefit of the village. “An enjoyable evening was spent with concert and whist drive”. The Institute was open to members each weeknight from 6 o’clock to 10 o’clock, and Saturdays from 2 o’clock until 10 o’clock. Members paid a subscription of 1 shilling per month for males, and 6d per month for females. Originally it was only open one evening a week for ladies, but later increased to two nights a week, and in 1933, three nights; Monday, Wednesday and Friday. Visitors could also attend at a charge of 3d per night. Games such as billiards were available (although no gambling) as well as newspapers and books for members to read.

Activities took place in the Institute such as regular whist drives, community singing, entertainments, physical instruction and various lectures on, for example, poultry, furniture, & lantern lectures. A room was let out to village organisations, such as the Women’s Institute, for their meetings and to the Vicar for various Church activities. During the summer months the Institute was let out to the Birmingham Girls Club.