John Pollard Seddon (1827 – 1906) was born in London on 19th September 1827. He became a pupil of the architect T.L. Donaldson but despite Donaldson’s neo-classicism, Seddon was quickly converted to the philosophy of the Gothic revival. Throughout his long career he maintained that Gothic was the only true Christian art, ‘most scientific and beautiful, and most in accordance with common sense’ (‘Ancient and modern ornament contrasted’, Building News, 29 Jan 1858, 109-12).

During the 1860s and early 1870s his architectural practice flourished. He is best known as the designer of the University College, Aberystwyth (1864 – 86), and promoted the first bungalows to be built in Britain. He was essentially an ecclesiastical architect building churches at Chigwell Row, Essex; Great Yarmouth; Ayot St Peter, Hertfordshire; Hoarwithy, Herefordshire; and of course Ullenhall. 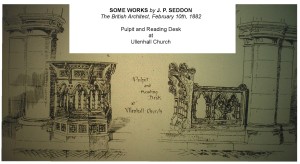 Between 1874-79 Voysey, the architect who later designed Brooke End house in Henley-in-Arden, was one of his pupils.

Much of John Pollard Seddon’s work was concentrated in South Wales & he was the architect of many picturesque gothic revival schools, parsonages and churches. He also carried out a great deal of church restoration, and was a designer of stained glass, metalwork, ceramics, furniture and other decorative arts.

An interesting element of Seddon’s career was his involvement with the Pre-Raphaelites. His brother, Thomas, was a minor Pre-Raphaelite painter and through him Seddon met artists such as Dante Gabriel Rossetti and Ford Madox Brown. He commissioned works for some of his buildings from these artists and also collaborated with them in his other work such as the design of furniture. In 1861 he designed a large oak cabinet, ‘King Rene’s Honeymoon Cabinet’, as a receptacle for his drawings. This included painted panels contributed by the Pre-Raphaelites and, now in the V & A museum, it is regarded as an important early example of the mid Victorian taste for ‘mediaeval’ furniture.

As well as building St Mary’s Church in Ullenhall, the Chancel of which he exhibited at the Royal Academy in 1877, he also designed the Vicarage, and the Conservatory winter garden at Barrells Hall in the 1880s.