Copy of letter sent to Margaret Feeney when she was researching her book “Ullenhall – Life after Lady Luxborough”.

You will not know me but I saw your picture of Ullenhall in the Mail so I thought I would write & tell you I used to live in Ullenhall at the “Coffee House” when it was just one house & the houses next door was built on our garden, our garden came to the cottage in your picture. The Bungalow at the bottom was a lawn & we sold ice-cream on there. There was also the bakery over the road from the Coffee House owned by Mr Allcott. We used to take our Fruit & Veg to Henley Market. My mother used to get teas in the field at the back & have factory partys. Also once a year we had a fair on that field belonging to our house. 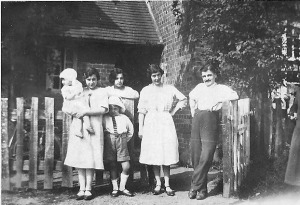 The Coffee House was owned by Cannon Newton of Redditch & my mother had Belgian Refugees in the first war. We came back to Birmingham but after a little while my Auntie who lived at Rose Cottage the top of the village said the house was empty so we went back.

I remember when watery lane was running with water & we had to go over the field. We used to have fox hunting outside the post office. I used to take telegrams to Barrells Hall & have 6d.

I went to Ullenhall School the first time we were there. There were not all those houses like there are now.

We used to have Dancing in the Coffee House, just for the Village & we were the only ones with a bath so some of the people used to come for a bath.

I still often come through Ullenhall because I love it so much, I called to see Mary Pugh not long ago. By the way my mother’s name was Mrs Ashton. I have still got a relative just bought a cottage to do up there so I shall be coming again.

We had a Jackdaw used to talk lovely & when I went out we always knew where to find him up at the Winged Spur. I believe the Coffee House is two houses now & it does not look so nice. 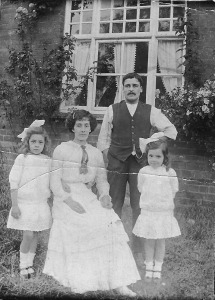 Samuel and Lavinia Ashton, with their daughters Beatrice and Ivy.

I used to help to dust the church the second time we came. We left because of my dads health. He came into Birmingham to work every day & walking to Danzey got too much & just getting teas at weekends was not enough to keep us. My uncle was signalman at Danzey station.

I could go on forever so I must close, but nice to think of someone else knowing Ullenhall. I hope you do not mind me writing to you but I don’t suppose I shall come many more times as I am 86 yrs old now but I still think of Ullenhall & the good times we had.