I lived in Ullenhall from 1935 for about 4 years going to the Village School.

The teachers then were Mrs Friend and Mrs Barrat. I kept in touch every Xmas with Mrs Friend right up until she died a few years ago, and still do the same with another ex-pupil.

I have very fond memories of my schooldays in the Village – going on Nov 11th to the Remembrance Service round the War Memorial, and standing in the cold & fog for the minutes silence, and the cars etc all stopping – The concerts we put on in the Village Hall – Nature walks around local farms – The school garden – and quite a few other things. I do have a photo of the class taken in the garden.

I also recall the P.O. was kept by Mrs Sparrow – the Stores by Mannerg e Jones – electric shop Mr Morgan and the Bakers Allcotts.

As you can see I remember a lot about Ullenhall even though I was only seven, but I think it was one of the happiest times of my childhood.

(Lived at the top of the village in one of the two cottages next to Rose Cottage).

Enclosed is a copy of the photograph, a newspaper cutting about the concert and a programme for the school concert (I think Mrs Friend used to write them out by hand). 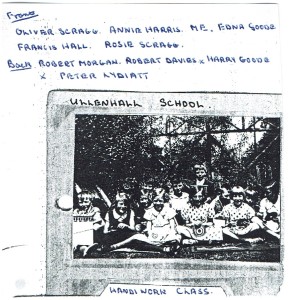 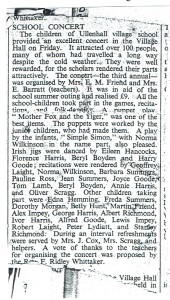 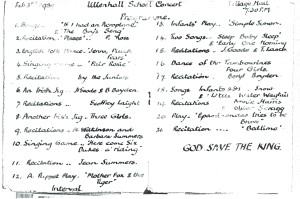