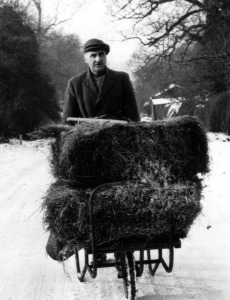 Mr John Taylor was the Pall Bearer, which was an honorary position. He would have worn a bowler hat and black clothes. The coffin would have moved on a hand bier, pushed by someone. You hardly ever saw horses pulling a funeral cart. The mourners would have walked behind. They would have walked through, ‘Bedlam Blunt Field’. This was called the Church Walk. The bier was kept in a shed at the Old Chapel. People would have been in mourning for two years. First they would have worn black, then mauve, then grey.

Later called the ‘Camp House’, travelers could stay there overnight. The working men’s club would meet there and play halfpenny nap and darts. Reverend Pelton at the Vicarage gave a dinner every Christmas. There would be rabbit pie, grouse, mince pies and a barrel of cider.

Rocky Herbert brought his fair to Ullenhall. It would be pitched in the field in the corner of Church Hill, opposite the bakery. There would have been the ‘Hurdy Gurdy’, Coconut Shies, Roundabouts – 6p per go. Ralph Franklin would lift the children up on to the roundabout and pay for them to have a ride. There was no money to spare for children, it was much harder in those days. The poor people ended up in the workhouse. The pension was 7/6 and you couldn’t claim it until you were seventy years old. People were happy because they didn’t know any different. There was more injustice to the poor, they had no rights. If you were born poor that was your bad luck.

“We were saddened by the death in mid-September of George Henry William Sadler. He was 79 and one of the older generation of Ullenhall folk who have lived here all their lives, a real countryman and a friend to all.

Bill had a twin brother who died in infancy. They were born in the same house in Gentlemen’s Lane in which Bill died quite suddenly and peacefully as he had always wished, on a day when he had been cycling round as usual. The house was his mother’s family home. Before her marriage to William Sadler she was Ada Tomlin and she returned to her old home to be with her parents and brother Walter to have her babies. Bill’s schooling began at the small school in the old Vicarage started by the Rev. William Pelton, vicar from 1901 to 1932, and was completed at Ullenhall School.

It is interesting to recall that Bill’s grandfather, George Tomlin, was a carrier who made three journeys to Birmingham each week and two to Stratford-upon-Avon carrying passengers and parcels. The large shed in front of the house was the stable with an end shelter for the conveyance. The latter, beautifully preserved and with a painted identification board inscribed ‘George Tomlin, Ullenhall’, is now in the 16th century Blakesley Hall Museum in Yardley.

Before he retired, Bill farmed his own land in Perry Mill Lane and the fields he rented opposite his house. He kept sheep, cattle and poultry, using a shed adjacent to the rented fields as a cowshed, and sold milk and eggs. He also kept horses at one time, partly to help with the farm and partly for his wife, Ivy, who was a keen horsewoman and hunted. He married Ivy, Marjorie Colley’s sister, in 1955. She was a frequent visitor to Mockley Manor Farm – May Hemming was a cousin of Bill’s – and it was here that they met. Ivy was a dedicated nurse and a sister at Little Bromwich Hospital when she retired. She died in 1978.

Bill was a delightful and entertaining person, ever ready with a welcome for visitors. He never seemed ruffled or out of sorts. Kind and generous, he would always offer a helping hand where it was needed and would often do kindness for people without their knowledge or being asked. It was a pleasure to visit him; having spent all his life in Ullenhall it was most interesting to hear him talk about the past and the changes that have taken place. Although independent by nature, Bill was grateful for the help he received in many ways from those around him and for the companionship he enjoyed. He will be sorely missed by his many friends and relations in our village”.

The following is from an article about Gentlemans Lane written by Mr Fred Colley and printed in the Ullenhall News, June 1998:

“Gentlemans Lane House was purchased in 1878 by Mr George Tomlin, who ran a carters business. He would collect goods from the local areas and deliver these to Birmingham and Stratford-on-Avon usually twice a week. Photographs show that on the roadside in front of the house were stables suitable for eight horses and also a hovel for coaches. It was at that time Mr Tomlin’s duty to exchange the horses and coaches of travellers. The role would include grooming the horses and taking them to the local blacksmith in the village to have replacement shoes fitted. He would also repair, as necessary, the coaches and store them safely ready for the travellers on their return journey.

In 1908 the railway came and this brought employment for local people. But at the same time the coach and horse travel ceased. Mr Tomlin then returned his hand to the farm and began producing milk, eggs, butter and other produce. On his retirement Mr Tomlin’s son Walter took over the farm. Walter’s sister, Mrs Sadler, although she owned the cottage known as Mockley View did not live in it. Instead she moved to Gentlemans Lane House to keep house and look after her brother Walter. She had a son named William who continued the farming business when his Uncle Walter retired. William Sadler retired in 1987. In 1989 we learned that his grandfather’s cart was restored and placed in the museum known as Blakesley Hall Museum. A photograph was taken of him standing alongside the cart with a placard explaining the local history.