Written by Miss. M. Pugh, this account won 1st prize for the village competition to write an essay on the Coronation Day celebrations. Miss. M. Pugh was awarded £1.0.0.

Coronation Day dawned grey and windy, after months of preparation the great day had arrived.

Collectors had been busy since the year had started. Whist Drives and Concerts had helped to swell the final total to over £200.

The catering committee met at 7am to finish the work already begun the previous evening. Tables for the childrens tea had been laid with cloths of silver paper and had bands of red white and blue paper running down the centre of each table. Vases of Iris, Lupins, Colombines and Fern were tastefully arranged and the whole scene was quite beautiful. On the stage was a giant crown to be lighted up in the evening with coloured bulbs.

Over a thousand ham sandwiches were cut in preparation for the evening buffet for adults which was to follow the childrens tea. The use of cut bread was a great help. At 9.30am each worker left his or her job of work and gathered in Church for a short service a very fitting start for a great day.

At 10.15am the Television Service commenced. Everyone who had sets had invited others into their homes to view the wonderful spectacle of a beautiful young Queen’s procession and crowning in the historical Westminster Abbey. The splendour and the reverence of the scene with the dignity, courage and (cannot decipher) of the Queen will never be forgotten by viewers. 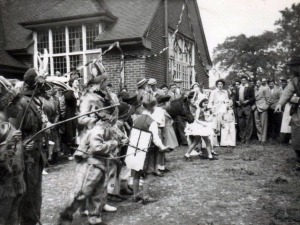 At 3pm the judging of Fancy Dress and Decorated Vehicles took place followed by the crowning of the Rose Queen. A wagon which had been beautifully decorated for the use of the Queen and her court then headed the procession proceeded by two Heralds on horseback; leaving the Village Hall the Heralds led us up Church Hill then down again and through the Village as far as Rose Cottage where we turned and re-traced our steps as far as the War Memorial and centre of the Village.

Country Dancing was performed by adults and Maypole Dancing by the children the Patter was very gay, the Maypole decorated with flowers and the children looking very attractive, girls in their brightly coloured spotted dresses and flowers in their hair with their partners in cream shirts and grey shorts; even with grey skies and occasional showers the scene was a gay one. 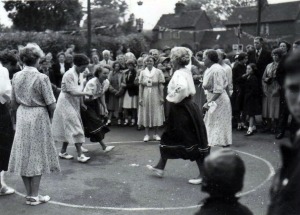 The posts erected either side of the Village were decorated with different coloured shields or banners and surmounted with large shining crowns with bunting linking the posts together the latter swinging gaily in the strong winds which were blowing.

Children then moved down to the Village Hall where a wonderful tea awaited them. Fruit, jellies, sandwiches, cakes, chocolate biscuits and ices to end up with. On the top table a wonderful iced cake had been made by a lady of the Village, and the children still found room for a piece of this when it was cut.

After tea a Coronation mug was presented together with a flag to each child and a canister of tea to each adult over 60 years old.

Childrens sports came next and at the same time the running buffet was ready and onwards until nearly midnight everyone was able to partake of tea, soft drinks, beer, ham sandwiches, small cakes, cherry and fruit cake and biscuits. It was raining quite freely now but sports continued. The comic football match being the high spot of the adults sports. The bonfire was postponed to a latter date on account of the weather.

Blue skies and sunshine would have added to the enjoyment of the day but nothing could take away the feeling of pride and loyalty that each of us had towards our beloved Queen Elizabeth II upon this her greatest of days her Coronation Day. God Bless our Queen.