The following has been typed from an account written in an exercise book. This account won 2nd prize for the village competition to write an essay on the Coronation Day celebrations. It was written by Elizabeth Bird and she was awarded 10/-

The first thing I did when I woke up on coronation morning was to think of the great day ahead of me. I wished that the weather would be nice, because we hoped to have a splendid time. There were such a lot of surprises for us all day. Some ladies were busy from 6.30am in the morning getting a lovely tea ready, which we were going to have in the afternoon. I woke up at 5.30am and read till 7.30am and then I got up and had my breakfast and made my bed. I got ready and went with my parents to church at 9 o’clock for Communion. We stayed to the 9.30am service. Crowds of people went to church to pray for our young Queen. When we came home at 10 o’clock we started to get ready for the Coronation Service on television. We had 18 people altogether sitting in front of the television set. It was a lovely service and procession. Prince Charles got lost in the coronation theatre once, but was quickly found again. I had not time to see all of it, but saw it on a telefilm at night.

The Village Festivities started with the Fancy Dress Parade, this was judged by Sir Albert and Lady Kahn. While the judges were deciding some of the girls were in the Little Room in the Village Hall getting ready for the crowning of the Rose Queen. The people that were to crown the Queen were Joy, Peace and Prosperity. It was after 3 o’clock when we were told to go out to the trailer lent by Mr Siddall-Jones. Mr and Mrs Brokenshire had decorated it, and made it look very pretty. We got on the trailer and crowned the Rose Queen. 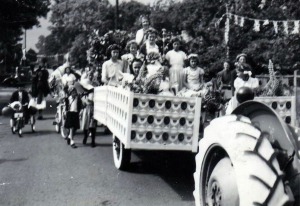 Two people were leading the procession, they were riding on horse-back. They were Miss Hartland and Mr Ken Earle dressed as heralds in red and gold. The Rose Queen was Barbara Ross who wore a white dress with a red train. Her attendants were Margaret Tomlin in a sea green dress, and Rosemary Summers who wore pink. The Maids-of-Honour were Diana Lewis and Jean Clayton. Diana wore blue, and Jean wore pink. “Joy” was Maureen Holt who had on a pretty yellow dress. Sheila Tomlin acted as “Prosperity” and wore a mauve dress. Elizabeth Bird rode on the trailer as “Peace”. She wore a white dress with gold braid on it. At the crowning ceremony the crown was handed by Prosperity to Peace who placed it on the head of the Rose Queen. After the crowning, the procession moved off, going up Church Hill to the Church where it turned round and went up the Main Street as far as Rose Cottages, and returned to the Memorial Cross where it stopped. Lady Kahn awarded the prizes to the best vehicle, the trailer on which we rode was the best and it got one pound for the first prize. The girls that attend at Ullenhall School had to get down from the trailer and ran to school where we all changed and put on spotted dresses. Some had red spots on a white background and the others had blue spots on a white background. While the girls were changing, the ladies were doing their four Country Dances. They wore flowered dresses, and the ladies taking the gentlemens’ parts in black skirts, Swiss blouses and red sashes. After they had finished, the Maypole Dancing started with the Double Plait. We could not get our ribbons quite right but everything else was quite nice. I liked the Single Plait best of all because it plaited so neatly. When the Maypole Dancing finished we all went down to the Village Hall where we had a lovely tea of fruit, jellies, sandwiches, cakes and the big Coronation Cake. 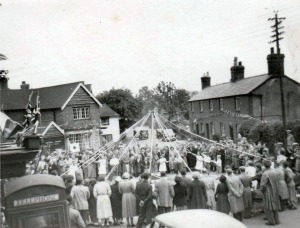 The childrens’ sports were next, and were made up of flat races, sack races, obstacle races, blind horse races and wheelbarrow races, last, but not least came the egg and spoon race. During this time the adults’ buffet tea was being held in the Village Hall. After the childrens’ sports came the prize-giving and the adult’s sports. There were a lot of funny races now, slow bicycle race, sack race, wheelbarrow race, and other races too. The fancy dress rugger was very funny. They could not have lots of the events because the ground was much too slippery for High jumping, Boxing on a pole, and other races. 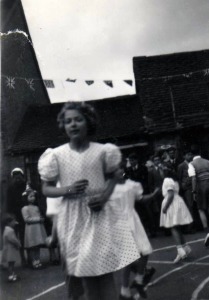 A dance was held at about 10 o’clock that night after the races. It was very wet and it was raining off and on all day so it was much to damp for the bonfire, but we had it about a week after, in the field by Mr Hancock’s house it was over 7ft high. Barbara Ross who was Rose Queen, lit the match. At once the sticks, rubber tyres, straw, oil and everything put on the bonfire began the burn. It was a terrific sight to see such a big bonfire burning away to cinders.

There was quite a lot of money in the bank, so it was decided that the old people over sixty, and the children under sixteen, should go and see the Coronation Film. All the fares for the coach, and the seats in the Stratford-on-Avon Picture House were free. On Friday June 12th at 1 o’clock three coaches came in to the Village. In the first coach went the children of Ullenhall School, in the second bus were the children from Ullenhall who attend Henley school. In the last bus the old people travelled. When we started we all had an ice cream which was also bought from the funds. At Henley some of the Henley children got on the bus. The first bus was a new one. We stopped at the Picture House and we got in couples ready to go in. The Commissionaire let us go in first, there was one school in, when we got there. We saw a film call “Royal Scotland” first it was a lovely film we saw the late King George and Queen Elizabeth in one part of it. We saw some of the Royal residences, Holyrood, Balmoral and others. On the Newsreel we saw the Queen on some of her drives, and the Queen at the Thanksgiving Service. The last film of all was the Coronation Film called “A Queen is Crowned”, this was in technicolours, and this film was really beautiful. We first saw the Queen leaving Buckingham Palace, and again on the way to Westminster Abbey, then she went in to the annexe. A few minutes later she was making her way up the aisle. She had a silent prayer, and then the Coronation Service started, the oaths, the anointing, the crowning, and this was followed by Holy Communion. The procession was very colourful, it was a slow one. The Queen smiled and waved all the time. So did the Queen of Tongo, Queen Salote, she did not only just wave her hand, but she waved her whole arm. We saw the Queen and the Royal Family on the balcony afterwards. I liked that very much. Well that was the end of our Coronation Celebrations. It was a time we shall always remember in Ullenhall.