By the mid-nineteenth century most country houses would have had an ice house, a building for storing ice, somewhere on their estate. The date of construction of the ice house at Barrells Hall is not certain. E.A.B. Barnard [Stratford-upon-Avon Herald 26/01/1951] suggested that it would be about the period 1845-50. There is no mention of an ice house in documents relating to the estate circa 1855, so it may have been built soon after the Newtons purchased the Hall in 1856. It is situated to the north east of the Hall in woodland, beyond the former walled garden.

In 1954 F.W.B. Yorke wrote a paper on ‘Some Midland Ice-Houses’. In this paper he provided a detailed description of the ice house at Barrells Hall:

“It is a substantial structure in brick, with a dome 8 ft. to 10 ft. above the ground-level. The rest of the structure is below ground with total internal height of 17 ft. 6 in. and a diameter of 13 ft. 8 in. at greatest circumference. In section it resembles an egg with the larger end uppermost, and is typical of many in the district. The strength of the dome may be judged from the fact that the roots of the trees above have left the 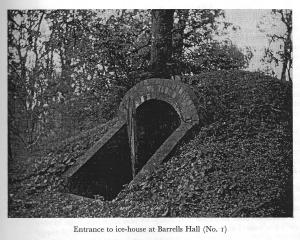 The building is entered at ground-level by a small corridor having a gate at either end – one a heavy grille door which provides the only ventilation, and the other a heavy oak door, both having massive locks. There were formerly steps down into the box, but these have been removed.

Although there appears to be no drain at Barrells Hall, the pit is perfectly dry, but the existence of a deep trench from the external base of the structure down the slope indicates that there was probably a drain at one time, but that it has been blocked. A drain would, of course, be necessary to carry away meltings.

Trees and shrubs were planted on the mound to shelter the ice-house from the sun. The entrance to the house is due east”.

We do not know when the ice house at Barrells Hall stopped being used. In general many were used until the end of the nineteenth century when their use began to decline. Hugh Newton decided to try to sell the property just after the First World War so it would have not been in use after this time, and may well have ceased its function many years before.

In 1954 F.W.B. Yorke stated that the ice house at Barrells Hall was probably the best-preserved example in the district. Around 2001 the landowner allowed some of the villagers to visit the ice house. It was still intact and proved to be an interesting example of an ice house.

A spaniel dog that had been missing for three days was on Thursday week rescued unhurt by Henley-in-Arden police from an ice-house in Barrels Park, Ullenhall. It had chased a rabbit into the house and fallen 20 ft to the bottom.

The police were informed after a farm baliff had heard the intermittent barking of a dog, but had failed to trace the whereabouts of the animal.

Sergt. Hollis and P.C. Manning searched unsuccessfully until the latter, who has lived in the area since boyhood, recalled that a dog was rescued about 15 years ago from a curious structure in the Park, known locally as the “ice-box”.

With the help of ladders, the police made their way to the bottom of the box, where they found the dog and a number of rabbit carcases in varying stages of decay. Eventually the dog, which was savage, was carried to safety.

Unfortunately, the inner door had been left ajar, with the result that the dog, in his excitement, had plunged straight after the rabbit when it had sought refuge in the box.