Those who pressed for the building of a hut argued that it would be expensive to run a club at the Coffee house; it was not large enough for dances; and the village would still be without a place to call its own. However at this point the option of renting the Coffee House prevailed and Ullenhall Village Institute opened in November 1927.

The idea of a Village Hall did not go away and in 1933 the Womens Insitutute contacted the committee of the Village Institute with a view to forming a committee to advance the building of a Village Hall. A building committee was formed, and the WI and other organizations set about raising the necessary funds. Several donations were received from villagers and former villagers.

On the 1st November 1934 a public meeting was held which appointed a committee to oversee the building of the Village Hall. This committee met a few days later and set about finalising the plans, and inviting building tenders. The builder, Mr Harry Tarleton, was appointed and work began in 1935.

The land on which the Village Hall is built was sold by Mr Siddall Jones of Brook House. It was bought by Mr Barber who then donated the site to the building committee. 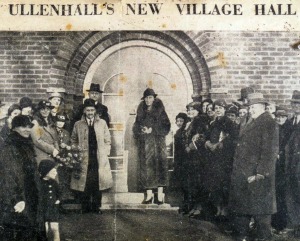 The official opening took place on Saturday 16th November when Mrs C.W. Barnard, Lady of the Manor of Henley-in-Arden opened the building. The Stratford Herald reported “The residents of Ullenhall can now proudly boast that they have one of the prettiest, best built, and most useful Village Halls in the county of Warwick. The structure has cost £1,500, towards which £1,350 has been raised”. On the evening a bumper whist drive, with 140 people taking part, was held along with a dance and refreshments.