I was born and raised at Tracey Farm on the Redditch Road, Ullenhall. Being a farmer’s grandson I had enjoyed an immense amount of freedom to roam over my grandfather’s farm, so at the age of 5 the very thought of school and the authoritarian regime filled me with great trepidation from which I never really recovered.

On my first day I walked to school, a distance of about a mile. Mrs Friend was Headmistress and took the main class and Mrs Barrett took the infants class. I spent the day in Mrs Friend’s class where I was allowed to sit between Barbara and Elizabeth Hunt whose parents were landlords of the Winged Spur Public House. Mr and Mrs Hunt were good friends of my Godfather who lived at Tracey Farm with us and I knew Barbara and Elizabeth who often visited Tracey Farm with their parents.

The second day I was moved into Mrs Barrett’s class. The children I recollect being in the class were Richard and Michael Smalley, Rosemary Summers (now Tisor), Carole Watton (now Holt), John Cleaver, Barbara Ross, Jim Salmons, George Rogers, Margaret Tomlin, Leslie Taylor, Sylvia Smith and Marie Alcott. Unlike schools today, the ages of the children in one class could vary by two or three years.

Mrs Barrett always seemed to me to be the more strict of the two teachers and she it was who taught me to read and write. The alphabet was printed along the wall of the classroom and we had to say the alphabet every day without fail. Also our multiplication tables (we children called them “times tables”).

When we arrived at school in the morning we played in the playground until the bell was rung. (The bell is still in working order in the School building which has recently become a private house). Timekeeping within the school was regulated by viewing of the Church clock … except on foggy days! We lined up in the entrance porch which was at the front of the School, adjacent to the road. We hung our coats on pegs in the porch and the register was called. Assembly followed with hymns and prayers. Then to our classroom where we sat two children to each desk. We had chalk and little blackboards to write on for the first few months before we progresses to pencil and paper. In Mrs Barrett’s class we learned the three Rs and it wasn’t until we went into Mrs Friend’s class that we learned anything of History, Geography and Art. Other subjects we covered were Music, Games and Nature Study. We listened to History programmes and the Music and Movement programme on the BBC radio – we had to clear the room and dance to the music. I particularly remember “Peter and the Wolf”. All the children had a little patch of garden (on what is now Dave and Eileen Evason’s garden and garage site) in which we learned to dig, weed, sow seeds and grow things.

Later on more children joined the class:- Frank Forster who was the child unrecognised in the 1948 photograph of the class published in the book, “Ullenhall – Life After Lady Luxborough” and Elizabeth Bird (now Ollis) whose grandfather was the Reverend Heyward, Vicar of Ullenhall. The family all resided at the Vicarage located where Mulberry House and Field’s Edge are now. I was not in the class photograph mentioned above because I had to spend more than a year at a Convalescent Hospital in West Kirby, near Liverpool, due to illness.

All the children had to attend Church services on special occasions. We would line up and walk across the field to St Mary’s Church along the footpath which was then a well maintained tarmac surface!

We did Maypole dancing up at the Vicarage in which I had to participate with great reluctance. Our Nativity Play every year was held in the Village Hall so that all the parents could see it, there not being room at the school for an audience. I can remember clearly sticking strips of coloured paper in chains to make Christmas decorations for the school.

I brought to school a big glass acid jar (which had been reclaimed from Oldberrow House) and we used it as an aquarium for tadpoles. The acid jar had previously been used in the production of electricity for Oldberrow House which had served as a Land Army Hostel during the Second World War. My other abiding memory of Nature Study was breeding silk worms which were fed on mulberry leaves (their sole diet) collected by the pupils, including Elizabeth Bird and myself, from the mulberry tree in the grounds of the Vicarage. The Vicarage was demolished some years ago to make way for two modern houses. The mulberry tree (which gives a house on the site its name) still exists and is protected.

I believe there was electricity connected to the school (although we had none at home at that time) to provide lighting. There was no central heating. The only source of warmth was the fireplace in each classroom by which the teacher’s desks were always strategically placed and of which Mrs Friend always took full advantage! I have a vivid recollection of Mrs Friend standing in front of the open coal fire with her tweed skirt hitched up slightly to warm herself! However, in the extremely harsh winter of 1947 we were allowed to move all our desks as close to the fire as was possible. Attendance at school was expected except in extreme circumstances or conditions.

Those were the days of free school milk. Every child was given a one third of a pint bottle of milk every day to be drunk during the mid-morning break. The only exception to this was Frank Forster who, on his mother’s insistence, brought his own bottle of goat’s milk. In the winter when the weather was very cold, the frozen milk expanded and pushed the waxed cap tops out of the necks of the bottles. The crate of milk would be brought inside and put by the classroom fire to thaw it out so we could drink it.

The school lavatories consisted of a brick structure with a tile roof at the top left hand corner of the playground and housed one for the boys and one for the girls. These were very basic. There was also an unroofed urinal area for the boys’ use which was situated under the oak tree. This was all right on a fine day but on a wet or windy day one was likely to be pelted with raindrops, acorns and leaves! This memorable tree was standing until quite recently when unfortunately it was cut down to make way for the Meadow Rise development. Handwashing facilities consisted of one outside cold water tap only (no hot water) fixed to a wall at the rear of the School in the playground. There was a piece of carbolic soap placed next to the tap and we were obliged without fail summer and winter to wash our hands. Much later on things improved when we were issued with a bowl of warm water within the confines of the school itself. This was supplied by Mrs Scragg the School Caretaker who lived next door at School House.

It was also Mrs Scragg who distributed the school dinners. The meals were brought in in aluminum containers. We sat and ate our meals in our classroom . . . except Michael Smalley who refused point blank to eat them and would spend an hour of each day after lunch sitting with a cooling meal in front of him as punishment. He never gave in. It seems the food was not to the standard he was used to at home – his mother being such an excellent cook!

I can never remember anyone receiving any punishment because we held the teachers in too much awe and respect to do anything wrong. However, there was one person whose behavior sticks in my memory. This was John Cleaver who, on more than one occasion after being reprimanded, shouted at Mrs Friend and walked out of school and went home to St Mark’s Close. To the rest of us this was shocking and unthinkable!. Times have changed!

Mrs Barrett lived with her husband, Alfred, in a bungalow at Forde Hall Lane. Mr Barrett, who frequently visited the school while I was a pupil, was well-known for being a local beekeeper. In later years I myself became a beekeeper and Mr Barrett gave me his honey extractor which I still have and a straw bee skep which has a prominent position in my home. I recently used it to collect a swarm of bees from my neighbour’s tree.

Mrs Friend was the wife of a local farmer, although she originally came from Clovelly in Devon. She had a picture of Clovelly on the classroom wall. It was after I had been on holiday in Devon and visited Clovelly that I came back and told her I recognized the place in the picture and she said, “That’s where I was born”.

Once a year a Doctor came to give us a medical examination and as a result of one of these I was prescribed cod liver oil and malt to supplement my diet. Mrs Friend administered my daily spoonful!

There was no school uniform although we were expected to be neat and tidy. All the boys wore short trousers summer and winter, hand-knitted socks and jumpers.

The annual school outing was usually to Weston-Super-Mare and mothers came too. 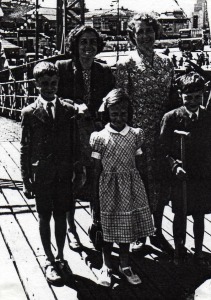