We were evacuated to Evesham (I don’t remember) at the outbreak of war as my mother had me, a small child, and was heavily pregnant. We soon moved to Ullenhall through some distant relative and rented the cottage opposite Roly Jones’s shop. We rented it from Mr Tomlin, who lived in the cottage next door, for 7’6 a week. It was a two up two down, large black leaded range and a large garden.

“We” were my mother and me, my brother (Kelvin), born just after my mother was evacuated, and later a sister (Beverley). Father was in Birmingham Fire Brigade and came out when he had a few days off duty. 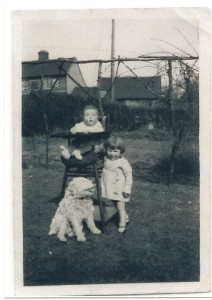 Kelvin (in highchair) and Judith Humphries in the garden of their cottage (Orchard Cottage).

I think Mr Tomlin was the air raid warden who would go around the village checking the blackout. The nearest bomb dropped at Henley railway line. When my father was at the Butcher’s in Henley they said to him “Now they’ve started to bomb us, you’ll have it easier in Birmingham”, which made my father think that they didn’t really know what it was like. I can remember looking out of our bedroom window the night that Coventry was bombed, you could see the glow in the sky.

Roly Jones’s shop was very good. My mother also had an allotment where she grew vegetables but snared rabbits, bought off local farmers, were an important source of food. We also had calcium, cod liver oil and welfare orange to supplement our diets.

Collecting rosehips to be sent to make syrup was also done. Rosehip syrup is very sweet and sickly.

My mother made Kirby grips during the war. She was given a little machine and I suppose someone collected them, but I have no idea how much she was paid for this.

I can’t really remember any celebrations at the end of the war, there might have been a tea in the Village Hall. I remember that every child had a certificate from the King and on the back there was space to write down the names of relatives who’d served in the war. People put flags out of their windows and maybe on the day, or a few days later, we (mother, me and my brother & sister) walked to Henley probably to get an ice-cream, or something, to celebrate. But when we got there everything was closed as everyone was off celebrating. When we got back home there was a big puddle outside Roly Jones’s and I jumped in that because I felt I wanted to do something to celebrate.

An Italian POW, who worked on their farm, used to bring Rosemary Summers to school with her sitting on the handlebars of the bike.

I was at the school from 1943-47, when I returned to Birmingham at the age of 9. The teachers were Mrs Friend (juniors) who lived at what we called ‘Friend’s Farm’ and Mrs Barratt who lived in a new bungalow up Forde Hall Lane. Mrs Friend had a proper teacher’s desk – a seat & desk all in one with a lift up lid where she would keep the register. The school had two rooms the big room and the infant room. The toilets were bucket toilets emptied by the night soil man. The heating was by open fires though I don’t remember the teachers stoking them up but I suppose they must have. The fire guard in the juniors was a black wire criss cross with a wide brass rail at the top. I remember that we would take briony berries in to school and these would be interwoven in the fire guard. When it was cold the bottles of milk, which we had at school to drink, would be sat on the mantelpiece to thaw.

The black board was on a tall easel and we wrote on slates. If we had done good work we could take the slate home to show our parents and then bring it back the next day and wipe it off. There was a cupboard in the corner which had treasures on – things we children had brought in to school. I remember taking in a bird’s nest and a sheep skull, as children these were a source of wonder.

I also remember a library box. This was brought, perhaps monthly, to the school and the old one taken away. It was a treasure trove and I’m not sure whether it was just for the school or whether other people in the village could borrow books.

The desks were arranged in rows with a year to a row. In some of the lessons all the years did the same thing such as knitting a pixie hood which was brown with blue edges and a red and white scarf. We also did country dancing so the desks were pushed to the edges of the classroom. I can’t think how the music was provided for this. In the infants we did music and movement which was a radio programme. If it was nice we did this outside and I remember dancing round the playground pretending to be leaves in the autumn.

Gardening was another lesson. We went through a gate in the playground to the school garden and each had a small patch. I think the boys grew vegetables and the girls grew flowers. I remember growing Californian poppies.

If the weather was nice we took mats out and had lessons outside. The little ones (four year olds) would have an afternoon nap outside on camp beds. There was a big tree in the playground which at playtime we would play under covering each other with leaves.

I remember one time when I went to Church with my family the vicar complained because I had not got a hat on, which we were not very pleased about. The only thing we’d got with us was a waterproof green plastic triangle so I had to wear that.

The forge would have animals there and the blacksmith was Mr Pearce. Mr Morgan ran the garage next to the school. In the cottage just past Roly Jones’s was an old lady who did dressmaking.

Mr Wilkinson from ‘Yew Tree Farm’ would bring milk round on his pony and trap. The milk was in a churn and a jug would be used to ladle it out.

Mrs Franklin lived at ‘Camp House’ and she held dancing classes down in Henley. I begged father to let me go and I went for a while. I would go down with other girls from the village in a taxi.

The bakery was run by Allcotts. One day when it was icy a horse and cart came down Church Hill and the horse ended up in the stream in front of the bakery. Father helped the other men to pull it out.

I remember ‘helping’ with the haymaking at Siddall-Jones’s down Watery Lane. Mother would meet us after school and we would go for a walk to collect wildflowers. One of the fields by the lane up to the Old Chapel was covered in cowslips.

We were bathed in a tin bath but mother would go over to Roly Jones’s for a bath so I suppose they must have had a proper bath.

Barrells Hall was derelict when we were in the village, but one day my father took us up there and we children were scared because we were trespassing. Father rang a bell that was there which frightened us. I remember there was a fireplace with beautiful tiles. I think the man who owned it was a bit of a recluse. Father was very keen on fishing and went to ask if he could fish the pool that was there but when he saw it it was covered in rushes and no good for fishing.

Fossett’s circus used to overwinter their animals in the village and walk the elephants up the village. They would turn round by our house and I can remember looking out of the window and seeing the back end of an elephant. Outside Roly Jones’s was always fruit and vegetables and one time one of the elephants helped himself to a bag of sprouts, eating the whole lot including the netting.