One of my first memories is of the hawthorn tree at the gate of the old school garden – covered with Waxwings – dozens of them. It was of course the very cold winter of 1947 but very memorable. I also remember seeing a Golden Oriole flying over the vicarage. 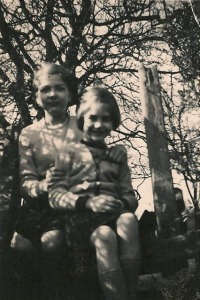 The teaching of the school in two classes of multi age children (5-7, 8-11) was excellent – and a lot of the kids went on to do very well. Mrs Barratt and Mrs Friend were accomplished and able teachers. We were mostly very happy and well adjusted children from the village. We arrived at 9 am to the school bell – (Mrs Scragg the school caretaker had built up two glowing and hot open fires in winter. Mrs Barratt after a bicycle ride to school from Heath Bungalow used to warm her backside by the fire in the small classroom.

We started to learn to write our letters (Marion Richardson style) on blackboards with chalk and our tables were repeated at about 10 each morning (up to 12 xs in Mrs Friend’s room). We had morning assembly – a hymn played by Mrs Friend and a prayer to start our day. I often wonder how so much information was gleaned by the various age groups.

Much fun was had at playtime playing ball games against the girls loo wall. My memories of P.E. are even vaguer as I was so bad at it !!! At playtime we used to spend hours playing in the roots of two huge trees in the playground making little pretend fires of twigs etc.

Twice a week we gardened. The boys, the vegetable plot and the girls in the flower garden divided into small plots (near the road). We had great competitions on who put in the most seeds and grew the best plants.

I’m afraid there were boys (mainly) who were quite thick – nowadays they would be dyslexic I’m sure and they would stand more chance. In those days it was the cane or ruler which ‘ruled’ the classroom. One memorable time Mrs Friend went to smack one of the boys (who shall be nameless) and he snatched his hand away and she fell forwards.

The outside lavatories were buckets (did my mother really allow me to be part of this). The buckets were under wooden seats – and were disgusting. They were emptied (sloppy away) every Wednesday by two very cheerful council workers into their sewerage cart. We didn’t have a wash basin until just before I left and the plug was attached by a metal chain.

Our school dinners were delivered by the lunch van – and served from the kitchen. Even though I lived next to the school I was never allowed to go home to dinner – part of my harsh training for later life or perhaps I enjoyed them.

We were fortunate enough to have many lovely country walks (part of Nature Study) and talked about, and collected things all along the way. A ‘love’ I especially still have – and a knowledge which if instilled at an early age – never leaves you. One of our annual spring walks was round the ruins of Barrells Hall – and in those days tiny pieces of mosaic marble could still be found and treasured.

We all lived fairly close to school – and before the days of many cars – so I was forever envious of the Smalley boys – Richard, Michael and Roger – whose mother used to come down the hill from the farm for them in a pony and trap.

I used to go up the vicarage drive walking from side to side so I didn’t stand on a dead bird. A phobia I still have from the boys throwing dead birds in the playground at me – how quickly I learnt of my fear.

I can well remember in my last year at school King George dying on my birthday (Feb 6th). Mrs Friend was very upset as she told us.

I also remember her bringing a pet jackdaw to school which amazingly I adored. It used to land on my shoulder and I walked home with it to share a picnic in the garden with it and my sister. It came to an untimely end, sadly.

Mrs Friend also brought two bottlefed lambs to school for the day for us to look after.

Easter time was always a special time and we all used to go up on to the Redditch road to the woods behind the Archer’s bungalow and gather primroses from the woods and slopes covered with the beautiful yellow tiny flowers and put them in small bunches, wind cotton round the stalks and take them back to church in baskets and carefully decorate the window ledges.

We used to have special services in church with all the school taking part.

Christmastime – Looking back we used to prepare for the fun and decorations for 4 weeks. Chains used to be made and pasted together and hung across the classrooms with pride and joy. Presents for Mum and Dad used to be made with tongues gripped between teeth! String holders from tins, and cards made with absolute care and calendars – our joy for the family for the year. After all the excitement the Christmas party was the ultimate happiness with a gift for each of us – and that was it – school out for the year.