In 1830 Thomas Astley was recorded as being surveyor for roads of the hamlet of Ullenhall, the latest in a long line of gentlemen appointed to this position.1 By an Act of 1555, each year every parish had to chose a surveyor of highways, an unpaid office which usually went round the ‘substantial householders’. In some cases parishes combined, in some hamlets were separate highway authorities. Ullenhall was a part of Wootton Wawen parish but had its own surveyor. This surveyor or waywarden was responsible for ensuring the upkeep and repair of the roads in the hamlet. He would call out the available labour in his parish to work on the roads, originally for four days a year under the Act, and later six. Parishioners who kept teams and carts had to send them; those without had to go in person. This was the basis of highway administration for almost 300 years2.

Issues relating to highways were overseen by Justices of the Peace at a local court – Quarter Sessions. Ullenhall was part of the Barlichway hundred which covered the areas of Alcester, Henley-in-Arden, Snitterfield and Stratford. Highway issues heard at Quarter Sessions included parishes having to answer indictments for non-repair of a road. At the session held at Epiphany 1679 “the inhabitants of Ullenhall were presented for not repairing Puckhill Lane leading from the old house of Francis Parker to Ullenhall Chapel”.3 Although no longer officially named, the lane leading from Chapel Gate Farm to White Pump Lane is still known as Puckhill Lane by some. Individuals were also required to answer indictments at Quarter Sessions; in 1670 at Trinity, “William Maunder of Ullenhall, yeoman, was indicted for making of a hedge and ditch in the king’s highway in Ullenhall called Stockyard Lane whereby the said way is much straitened” [made narrow]. 4 We do not know where Stockyard Lane was. At the Easter Sessions in 1652 Thomas Ostor of Ullenhall was “presented for straitening (narrowing) and taking in the highway in Ullenhall between Valentine Benfordes hedge end and Thomas Mill’s gate”. 5

In general this system meant that most of the roads in the hamlet would get maintained fairly regularly. However given the limitations in road building and surfacing they were not always easily passable. In her letters Lady Luxborough commented upon the state of the local roads “I am certain the rugged walk to Ullenhall Chapel . . . would never have inclined me to undertake it had not the company I was with smoothed the road and levelled the ruts; . . . But the roads are as rough as ever . . .”. 6 This was August 1748; wintertime and wet weather would have also made the lanes muddy, sometimes impassable.

Although it was the responsibility of the hamlet to maintain the roads, they were also used by people travelling through. Some roads, such as the main street through Ullenhall, would have had more use than others and trying to travel a long journey, especially in a wheeled coach or cart would have been difficult and almost impossible at certain times of the year.

The eighteenth century saw an increase in turnpike roads; this helped to improve some routes. In order for a road to become turnpiked an Act of Parliament had to be obtained. Local people, who had an interest in that road, met and subscribed funds to pay the legal charges for obtaining an Act of Parliament. If they were successful, they became trustees for the road.7 They were then able to levy tolls on those who wished to travel along the road, thus they could improve and maintain the stretch of road using money secured against the income from tolls.

The main road through Ullenhall Street was a route which was turnpiked by an Act of Parliament 1766-7. The road ran from Bell Inn, Northfield, via West Heath, Weatheroak, Portway, and Ullenhall Street to Wootton Wawen. The other lanes and roads in the hamlet remained the responsibility of the parish.

“. . . Robert, late Earl of Catherlough, whose home was at Barrells, near Ullenhall, had been ‘principally interested in procuring and making the said Road’, which had been ‘deep and founder ous and had a deep Water between his House and the London Road’. He had advanced £500; (others contributed sums) making £1,200, which had been chiefly laid out in building a bridge and ‘making a compleat Road near his Lordship’s House and Estates’. The earl had undertaken the management, the whole of the loans, and had taken a mortgage for the whole sum . . .”8.

The Acts had to be renewed every 21 years; there was an Act for its continuation in 1787-8 and in 1809. After this it is assumed that the Act was allowed to lapse. It is not known exactly when it stopped being a turnpike road, but would have been some time during the first half of the nineteenth century.9

The 1861 census shows that Joseph Dipple, an agricultural labourer, and his wife, Sarah, lived at the ‘Old Tollgate House’ at ‘Ungerhill’. This was probably the cottage now known as Raddington Cottage, which until the road was altered in the 1960s (see below) was situated next to a road bridge, where the road from Henley met the road from Wootton Wawen.

The Railway and Blunts Green.

The North Warwickshire Railway Line, which was opened in 1908, passes through the parish at Blunts Green. When you take the straight bit of road (coloured blue on the map) which runs alongside the railway you are travelling along a new piece of road, created when the railway was built. The original road (coloured green on the map) is now the track to Railway Cottage; it passed in front of this cottage (not called Railway Cottage at that time!) and joined up to the present road just below Blunts Green Farm. 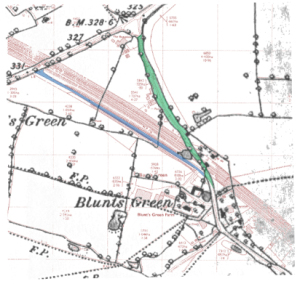 “VILLAGE TRAFFIC.- The majority of the villagers would no doubt, be able to hazard only a very vague guess if asked what number of vehicles passed through the village in the course of a week. The result of a recent road census is, therefore, of interest. In the week Monday, August 22nd, to Sunday, the 28th, a census of all vehicles passing through the village was taken, when the total was 3,223.”10

In the late 1960s the County Council carried out a series of road alterations. One of the most noticeable was in the area just past Crowleys Farm to opposite Hillcrest. The entrance to the village had been a winding road, but this was straightened out. The route of the old road can be seen on the left hand side as you leave the village, characterised by the large verge with a tunnel of trees. 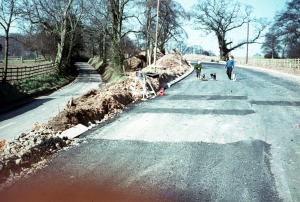 Another significant change was at the southern end of the parish, where the main road meets the Mappleborough to Henley Road. Prior to the 1960s this road continued all the way to Wootton Wawen passing by Fern and Brookside cottages and over a small bridge by Raddington Cottage. The junction was changed so that the road from Mappleborough to Henley had priority. A new length of road was created so that it no longer passed by the cottages and over the bridge. As you drive towards Henley you can see the route of the old road passing down the field in front of the Fern and Brookside Cottages. 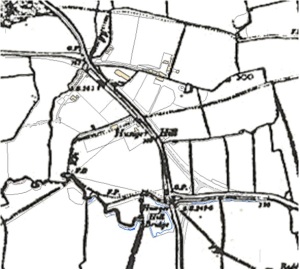