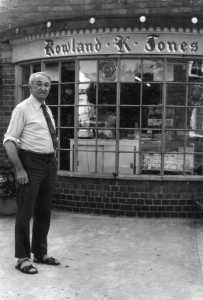 In the 1930s Mr Leonard Coarse built Central Stores in what was the garden to Church View.

It was bought by Rowland Jones in 1936 who ran it until he retired in 1972. The business consisted of a general grocery business with a wine and spirit shop, open from 9am – 6pm, with halfday closing on Saturdays. He also introduced ‘Antonio’ – the village fruit barrow which stood outside the shop displaying its wares.

When he first took over the business, he and his wife lived over the shop but gradual expansion meant that all their living accommodation soon disappeared and they bought a house in the village.

As well as being the village shopkeeper Roly Jones was very active in the community being a member of the Parish Council and a school governor. He also started a group of actors called the ‘Ullenhall Players’.

When Roly Jones retired Joan and Douglas Davis took over Central Stores. They took part in village activities, supporting the church and productions of the Ullenhall Players. Central Stores closed in November 1978, Mr and Mrs Davis moved to Alcester, and the shop was converted into a house.