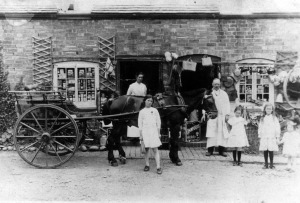 According to a newspaper article (1977) the deeds of the house, ‘The Old Stores’, go back to 1637 and the building has been a pub and a butcher’s shop.

In 1842 (tithe schedule) the property (which encompassed both ‘The Cottage’ and ‘The Old Stores’) was owned by Mr. Benjamin Turner, the occupier was a Mr. William Cox. On the 1841 census there is a William Cox, whose occupation is listed as a butcher.

Benjamin Turner was a tailor who owned and occupied White Gate Cottage. His son, William Turner, also a tailor is probably the William Turner who is listed as the owner and occupier of a cottage which stood on the site of Albany and Fieldfare.

On previous censuses very few properties were named and so it is often difficult to identify the property and who is living there, however on the 1891 census a property was referred to as ‘Ullenhall Bakehouse’ and this appears to be what later became known as ‘The Stores’. When it became a ‘Bakehouse’ is not known nor when it operated as such, but for it to be referred to as such on the census suggests that it was either operating as a ‘Bakehouse’ or had done so sometime in the past. There is little evidence of this from the census returns though and in 1891 it was occupied by Richard Hemming, an agricultural labourer, and his wife and six children. The adjoining ‘Ullenhall Slaughterhouse’, as it was identified on the 1891 census, was occupied by Alfred Hemming, a Tailor. For many years Alfred Hemming had been a tailor’s assistant to William Turner.

“All that Valuable LEASEHOLD DWELLING HOUSE, with Bakehouse, etc., adjoining, together with the large and productive FREEHOLD GARDEN, having a frontage to the main road of 78 yards. Water is laid on from the main.

It may well have been purchased by the Newtons as the property was included in the Barrells Estate Sale – 26th June 1919:

Built of brick and tile, situated in the Village of Ullenhall, adjoining Lot 17, comprising the RETAIL SHOP, with comfortable dwelling house attached thereto, adjoining which is a bakehouse, cart shed, stable, loft, and other erections, also a large garden opposite, the whole being in the occupation of Mr. Tatnall, Grocer and Draper, as a quarterly tenant, paying rates; together with a Piece of good MEADOW LAND, the whole containing an area of about 1a. 2r. 16p”

In 1902 John Allcott started his bakery business at ‘The Stores’ and ran it there until moving to the property now known as ‘The Old Bakery’ around 1905.

In 1911 Francis Chattaway was running the business. He was 34 years old and described himself as a baker (master). He lived there with his wife, Ada, and their two young children. Also living with them were Sidney Taylor, aged 18, an assistant baker, and Samuel Sykes, a chauffeur who boarded with them.

When the property was put up for sale in 1919 Mr. Tatnall was the tenant. Kellys Directories list Mrs Florence Tatnall as the shopkeeper throughout the 1920s.

By 1932 the business had passed to Stephen Impey. He ran a café and a taxi service.

In 1955 Tom and Mona Ivers took over ‘The Stores’, often referred to as Ivers’s by the locals. Needing more room for provisions they gave up the café, but in 1960 took over the newspaper round which Mrs Sparrow had been running from the Post Office. On September 3rd 1977 the Stores closed but they continued to provide the papers until 1985. Ken and Freda Earle took over the newspapers before this passed to Dave and Edna Powers from Tanworth.

“On September 3rd Mr & Mrs Ivers closed the doors of The Stores for the last time after over twenty years of supplying peoples’ requirements of groceries, fruit and general provisions. The closure of a village shop is always a sad and nostalgic occasion; and a reminder that there is nothing simple these days about running a business of this nature with all the forms and tax returns that this implies. They are, however, keeping on the news agency side for the time being which will be a relief to the many who rely on them for their morning and evening papers and periodicals. Tom and Mona have always supported this magazine and we know that all our readers will want to join us in wishing them a long, happy and well deserved rest and to thank them for all their help and hard work over the years.”