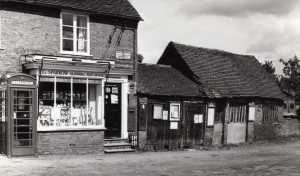 The Blacksmith’s Shop was a 17th century building so it is probable that there was a blacksmiths on that site in Ullenhall in the 1600s. Records show that both a Richard Dale (1615) and a John Cooper (1646) were blacksmiths in Ullenhall in that century, although they may not have been working from this site.

Around 1782 another William Godwin was born and he also became a blacksmith. He died in 1840 aged 58 and in his will he left his “freehold blacksmith shop and buildings with the garden” to his wife, Martha Godwin. Martha must have carried on running the business as on the 1851 census she described herself as ‘blacksmith employing one man’. She might have been employing Alfred Winter as he was a blacksmith on the 1851 census, but it is possible that Alfred Winter was operating a separate blacksmith’s shop as they were both listed in White’s Directory of Warwickshire 1850 – ‘M. Godwin blksmith; Winter Alfd blksmith & wheelwright’.

In 1861 Martha Godwin was employing William Fisher as blacksmith. He lodged with her in a cottage which stood on the site of the present car park of The Winged Spur, adjoining Hope Cottage. By this time Alfred Winter had diversified and was a ‘Thrashing Machine Owner’.

In Morris’s Directory of Warwickshire of 1866 William Fisher was still listed as the blacksmith and it is possible that he continued in this role until Martha Godwin died in 1868, aged 84. By the terms of her husband’s will the blacksmith’s shop was bequeathed to his nephew, another William Godwin. He does not appear to have taken over the business and in 1871 Richard Morris was listed as the blacksmith.

By 1901 Walter Clayton had taken over the Blacksmith’s Shop and had an apprentice blacksmith, 16 year old George Street. Walter was still the blacksmith in 1911 at the age of 61. He lived in the same cottage that Martha Godwin had lived in with his wife, Mary, and his 21 year old son, Frederick, who was a shoemaker.

“But it was the Smithy, or Blacksmith’s Shop, which fascinated us, especially Cecil, who spent a lot of time there. We liked to watch the smith, in his leather apron, using the large bellows to set the sparks flying from the anvil fire. Then came heating the iron until red hot and shaping the new horse shoe, followed by the singeing smell, as it was nailed on to the horses hoof. We were always lost in admiration, at his sheer skill, and his handling of those great cart horse” (Decima Britten 1900s)

Kelly’s Directory of 1921 listed Richard Tom Vearncombe as blacksmith in Ullenhall and he might have been operating from these premises. However by 1924 the Blacksmith’s Shop was no longer in use. At some point the Newton’s must have purchased the shop as it was for sale in the Barrells Estate Sale (23rd Oct 1924) where it was described as “An Old Brick and Tile Disused Freehold Smithy, with Garden attached thereto, containing an area of about 423 square yards”.

The building was used by Sid Hill for storage for his handyman business. Following this Fred Tomlin used it for his business, Ullenhall Egg Supplies. Later the building was sold to Billy Peace, a local builder. (Feeney, 1993, p97).

In 1971 planning permission was granted to build a house on the land behind the Blacksmith’s Shop. The building itself was to be used as a garage for the house on the condition that it was rebuilt. This was done in a similar design to the original building and using the original roof tiles, but new machine made rather than hand made bricks were used. This meant that it contrasted with the Post Office next door. Although the Blacksmith’s Shop was not a listed building the Parish Council did object but the District Council allowed building to continue. So essentially none of the building that the blacksmith’s toiled in for around 400 years remains. The garage for the house, ‘The Old Forge’, stands where the Blacksmith’s Shop was and a weathervane on its roof commemorates the blacksmith.