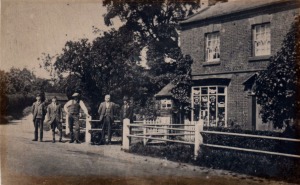 The 1842 tithe map and schedule show that the house now known as ‘The Old Bakery’ was owned by Mr. Joseph Houghton and occupied by Mr. William Cooke. According to the 1841 census William Cooke was a Cordwainer and he lived with his wife, Rebecca, and two young daughters Ann (3 years old) and Jane (9 months old). By 1861, now aged 52, William Cooke listed himself as a Grocer as well as a Bootmaker. His wife, Rebecca, was now listed as ‘Office Keeper’, whilst one of their daughters, Sarah, was a Grocer’s Assistant, and a son William, a shoemaker.

Rebecca Cooke, by 1871 a widow, was still a grocer and postmistress, and her daughter Jane was her assistant. At some point it would appear that they moved to the premises now known as ‘The Old Post Office’. This may have been between 1878 and 1881 but the records are not clear.

Around 1890 John Hind, a grocer, took over the property, referred to as ‘Grocer’s Shop’ on the 1891 census. He lived there with his wife Emma and their children. In 1892 they added a bakehouse to the premises and on the 1901 census John Hind referred to himself as a Baker and Grocer, their daughter Annie was a grocer’s assistant, and they employed John Checketts as a baker. The relationship between John and Emma was a difficult one: “The business was assigned to her (Emma) in October 1901 on account of a private disagreement between them. They came to an agreement again, but having another disagreement she took charge of the business again in January 1905. When she entered into the business it was not solvent. Her husband went about looking after the stock and mowing, and she gave him pocket money when he asked for it. On March 6th she gave up the business, something having occurred which made it impossible for her to remain with her husband”. (Leamington Spa Courier June 22nd 1906). In January 1905 John Hind had been charged with assaulting his wife. She had returned home from market and found him drunk and quarrelling with the baker. He attempted to strike her with his fist and then struck her a blow on her arm with a broom. (Leamington Spa Courier Jan 27th 1905). Difficulties with the business:- the expense of adding a bakehouse to the premises, the benefit of which was later reaped by the landlady; loss of horses and pigs; and expense of illness – led to Emma Hind being declared bankrupt.

The following has been written by John Merryfield:

John Allcott, my grandfather, married Elizabeth Southall in 1902 and came to live in Ullenhall at the ‘Top Shop’ (The Old Stores). He started his bakery business there and ran it for some time, indeed my mother, Olive, was born there. The original side flue oven was intact, although unused, right up to the time Mr Ivers altered the premises.

The family moved to what is now known as ‘The Old Bakery’ in, I think, late 1905. The property was at that time owned by the Hough family and was one of the few village properties not under the squire’s control, something which pleased my grandfather as he was a fiercely independent man.

The business had the bread supply contracts to the local railway building camps and prospered with the grocery shop, petrol filling station (selling petrol in 2 gallon cans before petrol pumps came into being) and running the ‘Allcotts Table Water’ business, which by 1933 had become quite sizeable. This side of the business was sold to Mr Taylor of Henley who ran it as ‘Arden Mineral Waters’ for many years and was also known as ‘Pop’ Taylor.

On the filling station side petrol pumps of various types were installed over the years.

The Bakery and Shop business continued until 1948 when the rounds were sold to Welch’s of Henley. The shop closed finally in 1952 when I took over the filling station and garage side and lived in the divided house with my grandparents until they passed away. We carried on the business with agricultural and vehicle repairs, petrol sales and Taxi work. In about 1958 we started a glass-fibre moulding side which progressed into boat building and outboard motor sales and servicing. This side, which grew rather rapidly and really pushed out the other bits, continued until I left Ullenhall village in 1986.